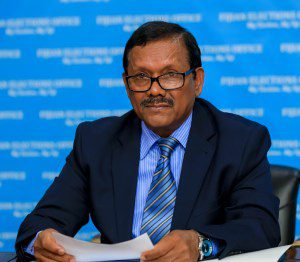 Mr Suresh Chandra, is the Chairperson for the Fijian Electoral Commission, appointed to the position by His Excellency the President of the Republic of Fiji on 3 February, 2017.

A legal practitioner by profession, Mr Chandra is a proprietor of MC Lawyers, a private practice which he joined in 1993.

No stranger to elections management, Mr Chandra was appointed as Chairperson of the Boundaries Commission in 2008 to facilitate general election in Fiji.

Mr Chandra was raised from humble beginnings in Tavua, and is married with one child.